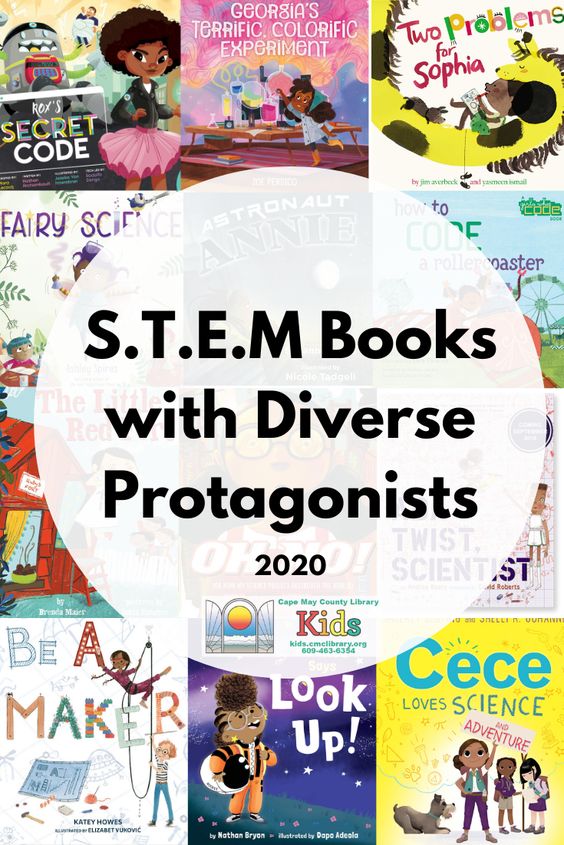 Science, technology, engineering, and math (STEM) are all around us, all the time! Check out our latest & greatest STEM books featuring a protagonist of color. All books are available for checkout from the Cape May County Library system.

Rox’s Secret Code by Archambault: “Rox does not want to clean up her room, so she creates a robot to do her chores for her, but Chorebot gets out of control.”

Georgia’s Terrific, Colorific Experiment by Persico: “Georgia wants to become a famous scientist, but she does not think her family of artists can be of any help to her.”

Two Problems for Sophia by Averbeck: “Sophia is happy to have Noodle, her One True Desire, yet her new pet comes with two giraffe-sized problems."

Fairy Science by Spires: “All the fairies in Pixieville believe in magic--except Esther. She believes in science. When a forest tree stops growing, all the fairies are stumped--including Esther. But not for long! Esther knows that science can get to the root of the problem--and its solution!”

Astronaut Annie by Slade: “When Annie has a career day at her school, each member of her family wonders if she will choose their career path--her grandfather the news photographer, her father the mountain climber or her mother the basketball player--until she reveals a dream that is all her own.”

How to Code a Roller Coaster by Funk: “"Pearl and her trusty rust-proof robot, Pascal, are enjoying a day out at the amusement park and learning more about coding.”

The Little Red Fort by Maier: “In this adaptation of the Little Red Hen fable, Ruby wants to build a fort, but her three brothers refuse to help, so when the fort is finished Ruby will not let them join her--until the boys come up with a few embellishments for the fort, like a mailbox, a garden, and a fresh coat of paint.”

Oh No! or, How My Science Project Destroyed the World by Barnett: “After winning the science fair with the giant robot she has builAda Twist is a very curious girl who shows perseverance by asking questions and performing experiments to find things out and understand the world.t, a little girl realizes that there is a major problem.”

Ada Twist, Scientist by Beaty: “Ada Twist is a very curious girl who shows perseverance by asking questions and performing experiments to find things out and understand the world.”

Be a Maker by Howes: “Illustrations and simple, rhyming text invite the reader to make everything from a tower to a charitable donation, alone or with neighbors.”

Rocket Says Look Up! by Bryon: “Aspiring astronaut Rocket draws her community together to see a rare appearance of the Phoenix Meteor Showers, hoping especially that her big brother, Jamal, will look up from his phone.”

Cece Loves Science and Adventure by Beaty: “When Cece and her Adventure Girls troop face a sudden thunderstorm, they use science, technology, engineering, and math to solve problems and make their way safely back to camp.”