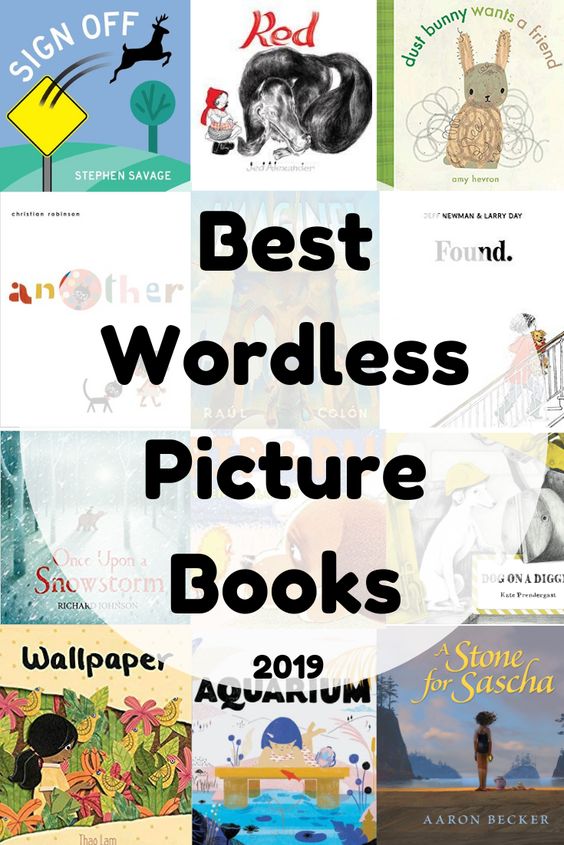 Wordless picture books (or, just picture books!) make up some of the best content of our collection. These books are incredibly important for young readers as they are actively engaged in thinking about the story and what the illustrations are communicating. Here is a list of our favorite new picture books from 2019. All are available for checkout from the Cape May County Library system!

Red by Jed Alexander: Red is on her way through the woods to visit Grandmother when she meets the Big Bad Wolf. What are that Wolf and all of those woodland creatures up to? This version of the classic folktale ends a bit differently. A delightful surprise awaits Red and readers in this wordless picture book featuring newcomer Jed Alexander's exquisite two-color illustrations.

Dust Bunny Wants a Friend by Amy Hevron: A lonely dust bunny tries to make friends with passing creatures with no success, until a broom sweeps him under the bed and he finds more friends like him.

Imagine! by Raul Colon: When a boy visits an art museum and one of the paintings comes to life, he has an afternoon of adventure and discovery that changes how he sees the world ever after.

Found by Jeff Newman: A wordless picture book about what we lose, what we find, and what we give back. Jenn's beloved dog was lost sometime ago. Long enough that she has given up the search. But she still misses her friend. One day she finds a lost dog. She takes him in and despite a rocky start, she grows to love him. Until she spots his picture on a missing poster. His name is Roscoe, and he's someone else's best friend. Jenn knows she should return Roscoe, but she really doesn't want to. Will Jenn do the right thing? Or will she keep this new dog she's grown to love so much?

Once Upon a Snowstorm by Richard Johnson: The Snowman meets the Polar Express in this dazzling picture book, sure to be a new holiday classic. The story of a father and his son who live by themselves in a cosy cabin in the woods. But, one day they are separated out in the beautifully falling snow. The boy is lost and falls asleep. When he wakes up he is surrounded by blinking eyes, a rabbit, a fox, an owl and all manner of other creatures have surrounded him! But with a bear hug he and the woodland animals become best of friends! But soon he misses his dad and so the animals bring him back home. The father opens up his heart and home, and lets nature and love envelop their previously lonely existence.

Pip & Pup by Eugene Yelchin: Across the barnyard, Pip the chick spots a new friend to play with - Pup! But Pup isn't sure he likes how Pip plays - too rough. These two friends will weather the storm though. A bright, fun celebration of friendship!

Dog on a Digger by Kate Prendergast: Two perennial favorites -- canines and heavy machinery - come together in a charming wordless book sure to please readers of all ages. Dog likes to ride along while his human companion works the big excavator at the construction site. But today, when they stop at the snack bar for something to eat, Dog's little puppy friend goes missing. Luckily, Dog has a brave and ingenious idea for coming to the rescue -- with the help of the excavator, of course! Incorporating bright yellow accents, Kate Prendergast's wonderfully detailed pencil drawings tell a satisfying story of a loyal, resourceful, and clever pup.

Wallpaper by Thao Lam: A wordless picture book about an imaginary world behind the walls in Thao Lam's signature paper collage style. It tells the story of a young girl whose family moves into a new house. Outside, she can hear other kids playing, but she's too shy to say hello. So she picks at the old wallpaper in her room - revealing an entryway to a fantastic imaginary adventure world behind the walls. There, she runs between the vibrant and varied environments as she finds herself chased by a monster. He is frightening at first, until it becomes clear he simply wants to be her friend. When it comes time to go back to reality, the girl feels inspired with the courage to approach the other kids and say hello.

Aquarium by Cynthia Alonso: In this wordless picture book, a little girl learns about love, nature, and the transformative power of letting go when a little fish leaps into her life.

A Stone for Sascha by Aaron Becker: A young girl, still reeling from her dog's death, finds solace while picking up stones on the beach during her family's vacation.