Picture Books about Being Yourself 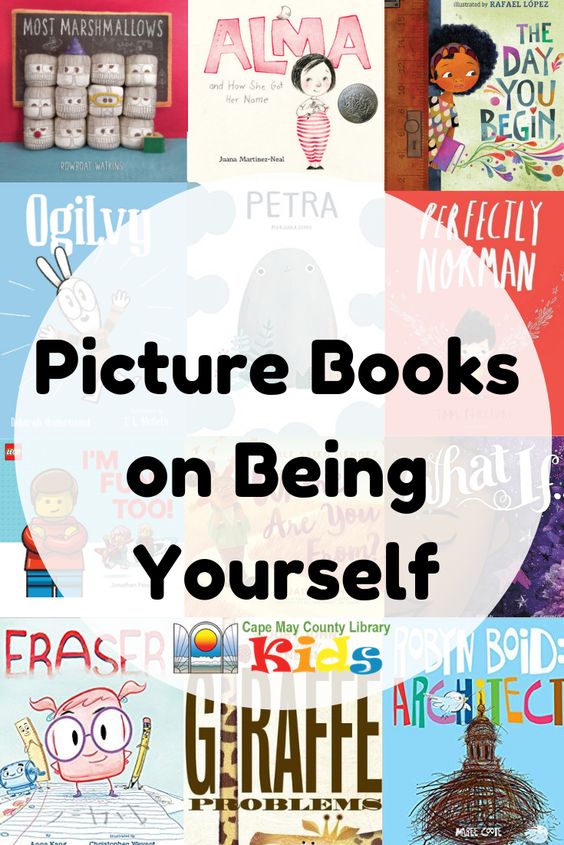 One of the most important and difficult lessons children can learn is how to be comfortable and confident in themselves. Thankfully, picture books exist that help children on that journey! Check out some of our favorite titles here. All selections are available for checkout from the Cape May County Library.

Most Marshmallows by Rowboat Watkins: Most marshmallows like to watch television and lead normal lives--but some marshmallows dream of greater things.

Alma and How She Got Her Name by Juana Martinez-Neal: When Alma Sofia Esperanza José Pura Candela asks her father why she has so many names, she hears the story of her name and learns about her grandparents.

The Day You Begin by Jacqueline Woodson: Other students laugh when Rigoberto, an immigrant from Venezuela, introduces himself but later, he meets Angelina and discovers that he is not the only one who feels like an outsider.

Ogilvy by Deborah Underwood: When Ogilvy moves to a new town, he discovers that bunnies who wear dresses play ball and knit socks, and bunnies in sweaters make art and climb rocks, and Ogilvy must figure out a way to do it all.

Petra by Marianna Coppo: Petra is a little rock who believes she is a mighty mountain... until a dog fetches her for its owner, and she is tossed into a bird's nest. A mountain? No, Petra is now an egg! An egg of the world in a world of possibility.

Perfectly Norman by Tom Percival: Norman is thrilled to discover he grew a pair of wings overnight, but his excitement turns to doubt when he realizes he is now different from everyone else, causing him to question whether there is such thing as perfectly normal.

I’m Fun, Too! by Jonathan Fenske:  What happens when an ordinary LEGO® minifigure of the past meets the extraordinary minifigures of today, with their elaborate vehicles, colourful clothes and wild accessories? He thinks he's no fun at all! But after feeling down about being ordinary, he and his new friends piece together just how special he truly is.

Where Are You From? by Yamile Saied Mendez: When a young girl is asked where she's from--where she's really from--she's no longer as she was. She decides to turn to her dear abuelo for some help with this ever-persistent question. But he doesn't quite give her the answer she expects.

What If… by Samantha Berger: A child who likes to draw and write stories imagines what would happen if there were no pencils, paper, or other tools for being creative.

Eraser by Anna Kang: Eraser is always cleaning up everyone else's mistakes. They all love how sharp Pencil is and how Tape and Glue help everyone stick together. Eraser wants to create so that she can shine like the others. She decides to give it a try, but it's not until the rubber meets the road that Eraser begins to understand a whole lot about herself.

Giraffe Problems by Jory John: Can you guess what's making this giraffe self-conscious? Could it be . . . HIS ENORMOUS NECK?? Yes, it's exactly that--how on earth did you figure it out? Edward the giraffe can't understand why his neck is as long and bendy and, well, ridiculous as it is. No other animal has a neck this absurd. Just when he has exhausted his neck-hiding options and is about to throw in the towel, a turtle swoops in (well, ambles in, very slowly) and helps him understand that his neck has a purpose, and looks excellent in a bow tie.

Robyn Boid: Architect by Maree Coote: Robyn Boid studied architecture at the National University and dreamed of becoming a famous architect. There's a lot more to architecture than nest-building, as this busy little bird soon discovers. Join Robyn Boid as she learns the most important principles of architecture by studying the great buildings of the world.

This entry was posted by OliviaG in category Recommendations on Friday, 28 June 2019 10:59 in blog Children's Department Blog subscribe
Bookmark